Kejserinde Dagmar og Garderforeningen i Koebenhavn.
(The Danish name of Tsarina Maria Feodorovna was "Dagmar", but as that
name can not be translated into Russian, the Empress adopted the Russian name Maria Feodorovna / Maria Fedorovna.)

Garderforeningen i Koebenhavn / The Royal Guards Association, Copenhagen, is the oldest regimental / all ranks association in the world, founded 1885.
The by-laws stipulate that only men who have served in "the Royal Guard on foot or Horse" can become members.

At the beginning the Association had financial difficulties, but the Board asked for - and received - financial aid from Empress Dagmar / Maria Feodorovna and her husband H.E.M. Tsar Alexander III in order to be able to purchase - among other items - a very costly silk standard/colours.

In 1909 the women's liberation had come so far in Denmark that a woman could be asked to accept honorary membership of the Association, an invitation the Empress accepted.

After the Russian revolution the Empress settled in Denmark and in 1997 the Royal Guards Association, Copenhagen, has no less that 11 members who have served as her guards.
The Empress spent the coldest months of the year at Amalienborg Castle in Copenhagen, but she did prefer staying at her villa "Hvidoere", 10 kilometres North of Copenhagen. She and her sister, H.E.M. Queen Alexandra of Great Britain and India bought the villa in 1907 as a summerhouse.
At Hvidoere the guard was a corporal and six guardsmen. The guard went from the Royal Guards Barracks in Copenhagen to Klampenborg by train and marched the last kilometre to Hvidoere.
The off duty guardsmen had rooms over the stables, the guard room was a rather small room with four beds and an oven - and sand on the floor.
Hvidoere had a garden on both sides of the Beach Road and during their spare time the guardsmen were permitted to take a walk in the garden and through a tunnel to the part of the garden which was located on the water side of the Beach Road.

The Empress took good care of the guardsmen on duty. She gave orders that the cook should every morning supply coffee and freshly baked bread to the corporal and the guardsmen - that did not happen in any other location where the Royal Guard served.

The inner guard duty was taken care of by two Russian life-cossacks who had learnt quite a bit of Danish. They slept on the floor in front of the door to the bedroom of the Empress.

The Royal Guards Association wishes to honour the memory of Empress Dagmar /  Tsarina Maria Feodorovna on the occasion of the 150th anniversary of her birth as a "Thank You" for the aid she and her husband gave to the Association during the first, difficult, years.

Three Guardsmen, members of the Royal Guards Association, Copenhagen, who stood guard for the Empress, will, on behalf of the Association, place a wreath at her sarcophagus in the Roskilde Cathedral. 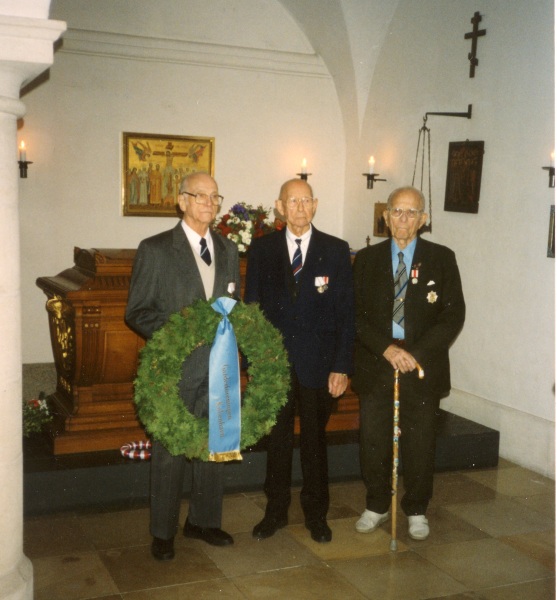 One of the guardsmen,  Johannes Hardenberg-Bruhn, became a guardsman in 1925 and did guard duty at Hvidoere as a guardsman.
In 1928 he was a sergeant. At the time very few people had a telephone, but Hardenberg-Bruhn lived very close to the Barracks of the Royal Guard and suddenly a guardsman came running:
Sergeant Hardenberg-Bruhn should rush to Hvidoere and take over command of the guard. The Tsarina had passed away and because many members of the royal family could be expected at Hvidoere, the NCO in charge should be a sergeant, not a corporal.
For that reason Hardenberg-Bruhn became the last NCO in charge of the Guards of the Empress. It was a very moving occasion.
The guardsmen on duty had, as a "Thank You" for the kindness the Empress always showed the guardsmen, pooled their resources in order to buy a large bouquet of flowers.
The sergeant was given the task of delivering the bouquet.
He was shown into the grand ballroom where the Empress had been laid to rest in an open coffin. H.M. King Christian X and H.M. Queen Alexandrine were present. Afterwards the weeping life-cossacks embraced the guardsmen and thanked them for their service.
During the day many wreaths and flowers arrived. The Royal Guards Association, Copenhagen, of course also sent a wreath.
When the time had come for the coffin to be taken to the Marble Church in Copenhagen most flowers and wreaths were taken in a separate van, but the daughter of the Empress, Grand Duchess Xenia, ordered that the wreath from the Association should follow the coffin.

LINK to the Grand Duchess Olga - page on the web site of Ballerup Museum.

Back to the TOP of this page.


Last update of this web page: February 2006. A larger version of the photo from the Roskilde Cathedral replaced the old in October 2012.
Web master: ©  Peter Horsten.